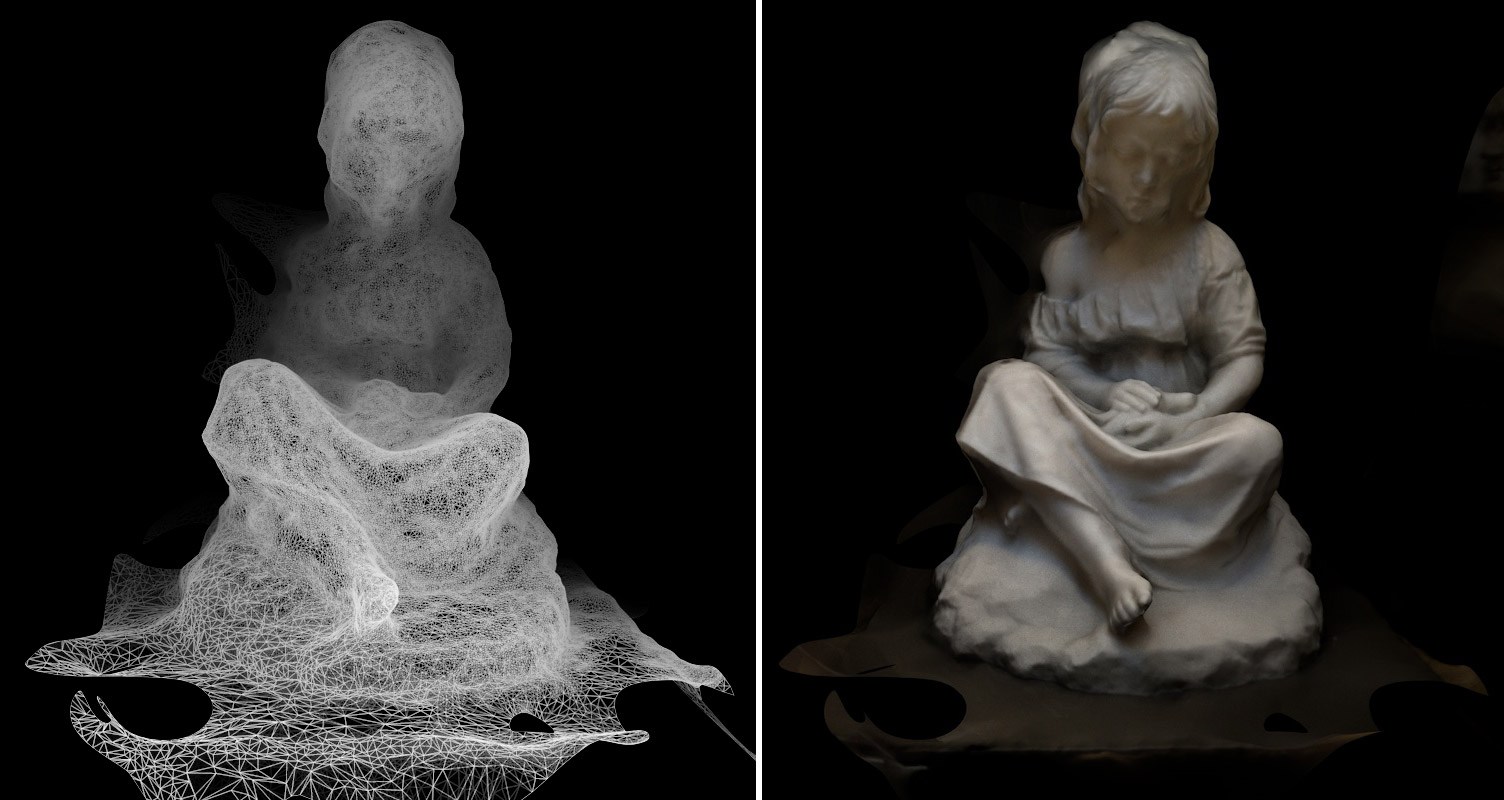 Through my practice as a visual artist, I was lucky enough to present my work in a variety of locations and contexts, from large public spaces, media art festivals, to small galleries. Recently, I also started conversations with art institutions, and had a chance to show some artworks at MAMCO, Geneva (2008, 2009, 2012), Centre Pompidou, Paris (2010), BFI London (2011) and CMoDA, Beijing (2012). I also conducted a workshop with young audience at Musée d’Art et d’histoire, Geneva (2013).

I dedicate a large part of my time to research and understand new and upcoming technologies, and I had a chance to share some ideas with curators and museum professionals. Here’s a brief list of ideas that I think could help enhance or create new experiences in museums.

It is basically a 3 dimensional version of a photography, but the scanning process captures and stores the shape/structure of the subject.
The 3d scan is then stored as data, can then be archived, duplicated, 3d printed, distributed and shared online, viewed on a screen or in an immersive environment, like a virtual reality headset or a stereoscopic display.

Some museums are already using 3D scans:
– London’s science museum is selling 3D printers and offering virtual tours of laser scanned galleries.
– the Smithonian is scanning for archival purposes
– the Met is going even further by creating conversations and engaging with it’s audience during workshops.

A few have even started scanning and sharing their collections online:
– The Metropolitan Museum of Art (75 objects)
– The Smithonian (26 models)
– The British museum (14 models)
– Lincoln collection (74 objects)
– The Google cultural institute is also building a database of 3D scans.
It is still a rare practice, and despite the relatively small online collections, a single object can generate a large number of interactions, with 22.500 views and 1.100 downloads for the “Granite head of Amenemhat III” alone.

While the scanning process was very expensive a few years back, it has now become very accessible (thanks to the photogrammetry softwares) and anyone can now 3d scan any object, within seconds, with a simple smart phone, and museum visitors generate their own scans / 3d data:
– Sketchfab has a large amount of meshes (no precise stats)
– 123d website offers 576 models
– Thingiverse has 2.000 models, user-generated scans from museums, freely available for download.

Visitors are currently generating more data than the museums themselves, outperforming the museums’ ability to digitize their collections, this is a great indicator of the audience interest in these new fields.

There might be an opportunity for museums to consider crowd-sourced 3D scans from their visitors, and possibly offer new ways of interacting with the collections.

Pictures below:
3D scan of Little girl with a dead bird (Jens Adolf Jerichau, 1871) I did at the Glyptoteket, Copenhagen.
Scanned in 50 seconds with an iphone 4GS. software: Agisoft photoscan.

Once digitized, here’s a few examples of ways to interact with the 3D data:
– Virtual tours and on-line browsing
– 3D printing (ie: 3D print your own museum)
– Remix and creative modeling (ie: 3D Hackathon by Jon Monaghan at the Met)
– Virtual reality headsets.

In my opinion, VR headsets have an amazing potential, as a new way for museums to deliver their content, especially to make (parts of) their collections accessible to audiences who can’t physically come to the museum.
Access to archives could also be offered for educational purposes to students and researchers, and scans would inform the viewer about scale, depth, relief and details, and additional data 2D photography can not provide.

Oculus was recently acquired by Facebook, and is set to be released later this year, so we can expect to see it everywhere by the end of 2016. There isn’t much content available yet, and most of it is yet uninteresting and lacks depth. I hope museum will seize this opportunity to have content ready when the Oculus rift hits the market.

<< When 1 child is happy in a museum there are usually 3 adults who will be encouraged to visit. >> said Geneva’s Mayor at his opening talk of the Museum Next conference.

Back in 2013, I was invited by the “Musée d’Art et d’Histoire” in Geneva to run a workshop about projection mapping with children. We used a cast of the Parthenon Frieze as a canvas for projections. The kids drew over a template and made their own version of the Frieze, that we then re-projected onto the original cast.

Projection mapping technology allowed us to use the artwork as the central element / main focus of the kids for the entire day, and create their own stories, and explore new perspectives. The use of projected light prevents any risks of damage, as we didn’t physically touch the original.

Workshop at Geneva’s “Musée d’Art et d’histoire” with Joanie Lemercier, projections of children’s drawings onto a cast of the Parthenon Frieze.

Many museums buildings have stunning architecture and represents a unique heritage.
Projection mapping can turn the architecture into a canvas for artworks or data visualisation.
The right balance between spectacle, narratives and content as yet to be found, but there’s a great potential here to offer a unique new perspective on the architecture that hosts the museums.

above: projections on “MUSÉE D’HISTOIRE DE NANTES” produced with other artists from AntiVJ, photos: Joanie Lemercier

The use of real objects as a canvas for projections, as opposed to experiences through phones/tiny screen.

I believe that phones, tablets and other screen based devices are bringing the attention away from the works.

Once again the Metropolitan Museum of Art in New York is leading on research and experiments, and its MediaLab department has produced a fascinating installation, using mapping to bring back the original colors of the Temple of Dendur. Note that the audience is looking at the original stone carvings, rather than looking at a often small, low resolution picture on their phones.

These emerging technologies are bringing us an incredible opportunity to craft new experiences for the audience, make content more accessible, start new conversations about archival, education, audience engagement and bring new perspectives on the collections.

All these technologies are available today, and I’m looking forward to develop these ideas and techniques on tangible projects tomorrow, feel free to get in touch if you’re interested in some of these topics, let’s bring these new experiences to life.